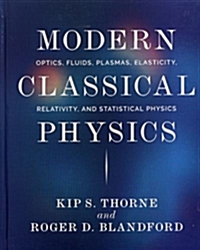 This first-year, graduate-level text and reference book covers the fundamental concepts and twenty-first-century applications of six major areas of classical physics that every masters- or PhD-level physicist should be exposed to, but often isn't: statistical physics, optics (waves of all sorts), elastodynamics, fluid mechanics, plasma physics, and special and general relativity and cosmology. Growing out of a full-year course that the eminent researchers Kip Thorne and Roger Blandford taught at Caltech for almost three decades, this book is designed to broaden the training of physicists. Its six main topical sections are also designed so they can be used in separate courses, and the book provides an invaluable reference for researchers.