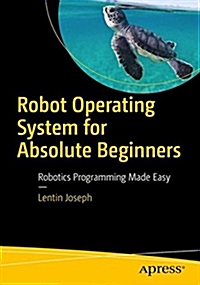 Robot Operating System for Absolute Beginners Chapter 1: Getting Started with Ubuntu/Linux for Robotics This chapter will give the basic foundation of Ubuntu Linux. Starting from the fundamentals, installation and useful commands which are using while building and programming a robot, we will also see useful software applications which can be used while making robots. Chapter 2: Fundamentals of Python and C++ for Robotic Programming Programming robots can be done using any of the programming languages. Most popular programming languages are Python and C++. In this chapter, we will see fundamentals of Python which are mainly used for programming robots. This chapter will also cover C++ and the important topics needed to program a robot. Chapter 3: Kick starting Robot Operating System This chapter starts discussing Robot Operating System, Fundamentals, Installing, ROS tools and ROS commands it on Ubuntu. Chapter 4: Programming with ROS This chapter is fully focused on programming ROS using C++ and Python. We will see some example code in this chapter. Chapter 5: Building and programming mobile robot using ROS This is a hands-on project which is used to apply all concepts of ROS that we discussed in the above chapters. We will see some more concepts which will explain in the appropriate sections. The aim of the project is to perform a dead-reckoning using a cheap mobile robot. We can command robot position on Rviz and robot will move to that position. Chapter 6. Robotics project using ROS