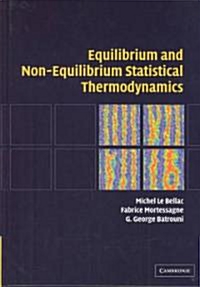 This graduate-level text gives a self-contained exposition of fundamental topics in equilibrium and nonequilibrium statistical thermodynamics. The text follows a balanced approach between the macroscopic (thermodynamic) and microscopic (statistical) points of view. The first half of the book deals with equilibrium thermodynamics and statistical mechanics. In addition to standard subjects, the reader will find a detailed account of broken symmetries, critical phenomena and the renormalization group, as well as an introduction to numerical methods. The second half of the book is devoted to nonequilibrium phenomena, first following a macroscopic approach, with hydrodynamics as an important example. Kinetic theory receives a thorough treatment through analysis of the Boltzmann-Lorentz model and the Boltzmann equation. The book concludes with general nonequilibrium methods such as linear response, projection method and the Langevin and Fokker-Planck equations, including numerical simulations. This advanced textbook will be of interest to graduate students and researchers in physics.

A graduate-level textbook in statistical physics and thermodynamics.